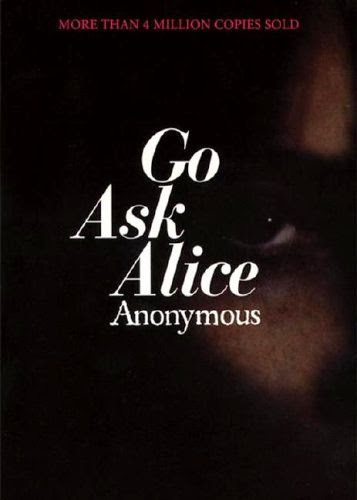 Summary: It started when she was served a soft drink laced with LSD in a dangerous party game. Within months, she was hooked, trapped in a downward spiral that took her from her comfortable home and loving family to the mean streets of an unforgiving city. It was a journey that would rob her of her innocence, her youth -- and ultimately her life.
"January 24th
After you've had it, there isn't even life without drugs...."

Review: This book is the edited journal of a girl who went through this in the seventies.
I am not ashamed to admit that I cried at the end of all of this series of books by Anonymous.  Along with Go Ask Alice, there is Letting Ana Go, Lucy in the Sky and Jay's Journal which I have yet to read.  Of the three that I read I would probably have to say that Go Ask Alice is my favorite by far because of the fact that her whole ordeal with drugs began by her being unwillingly and unknowingly drugged.  All she wanted was to be part of the popular group so she of course she would jump at the possibility of going to a sleepover with the very girls she looked up to.  They drugged her and this was what led to the downfall of her life.
I found these books to be life changing because when you hear about drugs all you hear is that "drugs will ruin your life and kill you."  By reading these books you learn the truth of drugs - they can feel like fun at first and seem like a good escape, but what you don't realize until it's too late is how true what everyone has been telling you is.  The protagonist (who's name you never know for certain) lost everything that meant anything to her. I will willing admit that although I almost never cry in books, I was balling my eyes out like a baby at the end of the novel.  Go Ask Alice has been labeled as a banned book due to its content that deals with drugs and sex and such but I found that it altered my views on both of those things.  She gives up her virginity to someone that was only using her to make a profit and she gives up her life to her addictions.  This is a book that I think rather than being banned by many schools should be on the required reading list because it teaches about drugs and many things that high schoolers are doing nowadays, thinking that there won't be any consequences and that everyone is making these things out to be worse than they really are. But this book teaches how wrong this way of thinking really is.