THROW BACK THURSDAY (The Mortal Instruments by Cassandra Clare)

What is this: Chances are all of you reading this post can think of a single book or series that got you hooked on reading, especially whatever genre it may be that you prefer.  I myself, go for YA, fantasy, or Sci-Fi. I think that we need to thank these authors, whoever they may be, for shepherding us to a fanbase where we (or at least I) should have been our whole lives.  I decided to post a #TBT to what book started my obsession with reading. 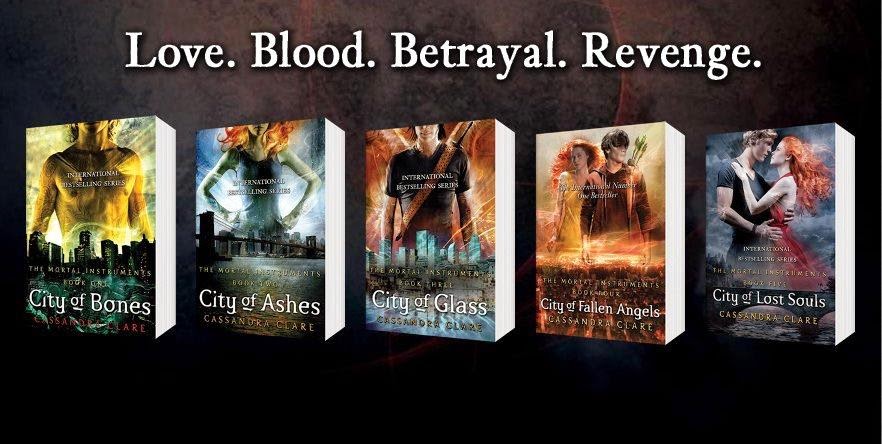 Background: I did in fact read books such as PJO and Harry Potter and, one of my all time favorites, A Series of Unfortunate Events before I read The Moral Instruments and the accompanying The Infernal Devices, but I never truly fangirled about them.  TMI was the series that I will willingly admit turned me into a total book nerd.
This series traveled like wildfire through my group of friends and by the time we had read all the books, there were (and still are) lengthy discussions about the book, several different photo streams with related pictures, midnight premieres for the movie, and so much more. The final book City of Heavenly Fire has been released although I personally have not read it yet. The first book was adapted into a movie (which, quite depressingly, didn't live up to my, nor my friends', hopes and expectation) but as to wether or not the next book is becoming is a movie, your guess is as good as mine. There is another accompanying series, The Infernal Devices, which is referenced several times and will be adapted into a TV series and an entire other series called The Dark Artifices that will be released next year and is set slightly later and with different characters, but with the same background and basis.
These books are amazing and I read most of them in one day because I simply refused to do anything other than read once I had started them.

P.S. Please share what books started your reading obsession below in the comments.  I would love to hear from you guys.  Maybe I'll even read and review some of them!!
Posted by Unknown at Thursday, November 20, 2014